There’s an urban legend that says it’s not possible to drink an entire gallon of milk in an hour. Some sources say it’s because of a chemical in the milk, others because of the sheer volume of liquid. Today, coworker Shawn Dvorak took me up on my offer to pay him $20 if he could drink a gallon in an hour and keep it down for another hour. Shawn’s terms: I must provide the gallon of milk, which must be skim, and some Oreos. We did this all at the office so everyone could enjoy. 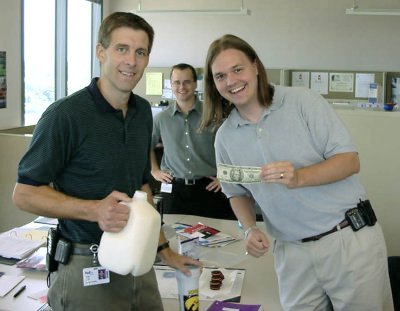 Me and my $20, plus Shawn and a gallon of skim milk. I had heard that it’s the bacteria or something in milk that keeps you from drinking a gallon, so when he requested skim milk I figured it wouldn’t make a difference.

Notice how happy Shawn looks. We’ll call this the “before” picture. 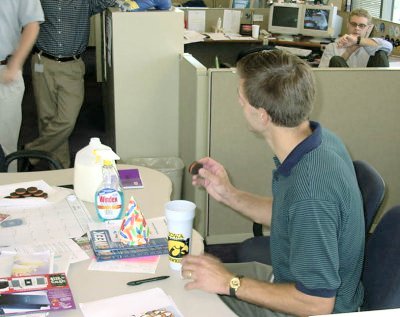 It’s on. As if a gallon of milk in your stomach isn’t enough, Shawn is going to eat Oreos with it! Since I had to supply the cookies, I chose Halloween Oreos so his vomit would look more disgusting.

Our impartial timekeeper, Bruce, is in the background. This is about ten minutes into the milk-drinking hour.

The Elmo party hat was left over from some other occasion I can’t remember. (Man, we really don’t get any work done.) 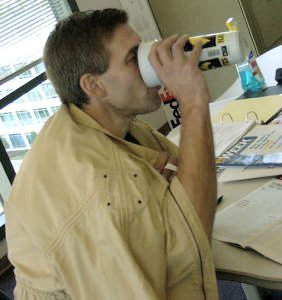 About 40 minutes into the drinking, Shawn has put away two-thirds of the gallon. But drinking all that cold milk has lowered his body temperature, and he’s shivering.

We get him a jacket, and he continues to drink. He’s slowing down, and says that he feels really full, but there’s still plenty of time left. 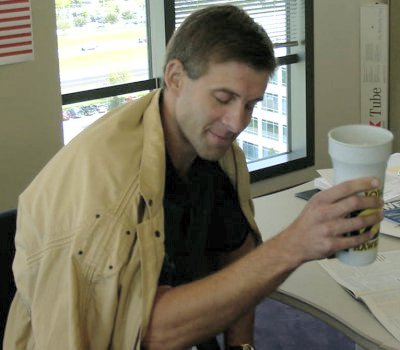 With less than a minute to spare, Shawn actually finishes the gallon of milk! At this point, he looks and feels pretty miserable. He asked us not to make any jokes because laughing hurt his stomach.

None of us thought he would make it this far. But now he has to keep it down for another hour. 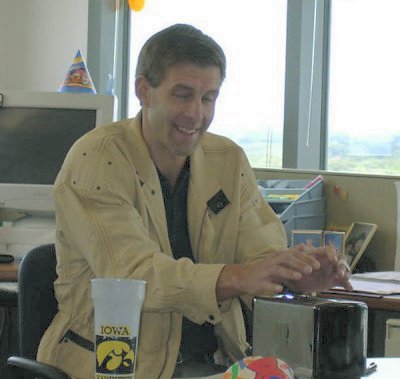 For lack of a heater, we set up the toaster so Shawn could warm his hands. This didn’t really help, since it wasn’t his hands that were cold, but it did make him look like more of an idiot and provide a great photo opportunity.

He says he doesn’t feel sick, just really full. He’s got about 45 more minutes to hold down the milk. 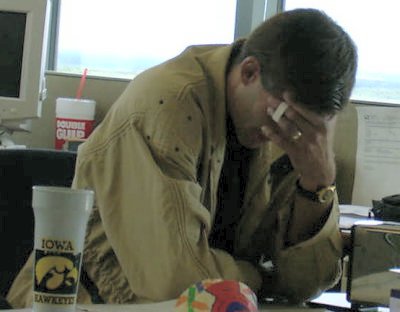 Finally, I get what I’ve been waiting for. With about 15 minutes to go, Shawn feels positively awful. He starts rehashing all the stupid things he’s done in his life and decides that this is the third most stupid.

He only has to go 15 more minutes, but I thought I’d win at this point. 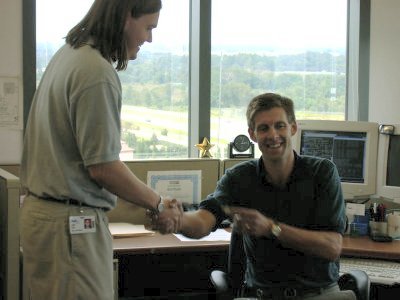 I couldn’t believe it, but Shawn endured the entire hour after drinking the gallon of milk! I congratulated him and handed over the $20.

Five minutes after this picture was taken, Shawn was in the bathroom throwing up. Apparently, the milk bet can be won, but it’s tough. Even though I lost my money, the entertainment for me and my coworkers was worth $20. 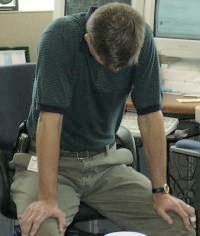 Minutes after vomiting (the first time), but having won the bet, Shawn recorded his thoughts on the experience:

I made it: I drank a gallon of milk in one hour, and kept it down for another hour. I didn’t think it would be that hard - I often drink half a gallon of water in less than an hour without a problem. It was. I wouldn’t advise anyone trying this, because it was really, really unpleasant. The first half-gallon went down fine, though I was already beginning to dislike the taste. By the time I got to the last cup I was very bloated and starting to feel sick. By the time I got it all down I felt really ill. One of the worst problems was that I got so cold. All the cold milk in my stomach dropped my body temperature a couple of degrees, so I had to put on a coat to warm up. I thought I would start feeling better as the hour went by, but my stomach started to cramp, probably pissed at being stretched to the size of a basketball. I made it the required hour but after another 15 minutes I just had to give up and force myself to spew (Note: don’t eat Halloween Oreos along with the milk - the vomit looks like black and orange cottage cheese).

I used to really like milk, but it will be a very long time before I drink it, or eat Oreos. It is possible to drink a gallon of milk and not hurl for an hour, but I think very few people could keep it down for good. DON’T TRY THIS AT HOME. If you are going to try, do it at someone else’s home.